RSS
← Thirsty Koala – Give a Bear a Drink!
Lee Anthony’s depostion (in Zenaida’s case)- a summary. →

Casey Journaled about Having NO regrets and Hoping the End Justified the Means!

Wow. Stick a fork in her…she’s DONE! Hundreds of pages of even more incriminating documents were released today in the Casey Anthony case. Including the disturbing Journal entry she wrote on June 21 saying (among other things that) “this is the happiest I’ve been in a very long time.” This is probably why Jose had to check himself into the hospital for “stomach pains” – maybe he can’t “stomach” the fact that his precious little publicity magnet/client has dug herself quite a grave and the best thing for his client, though NOT for him would be for her to take a plea- forcing Jose to lose his precious spot in the eternal glow of the shameless press. 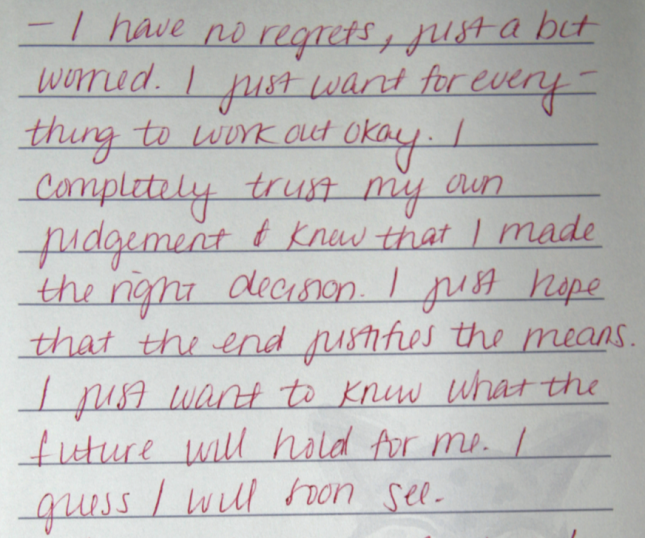 She acts like a burden has been lifted from her- which is obviously how she felt. I’m sure she wanted to write what she probably continually said to herself– Caylee is in a better place. Actually, I don’t think that spiteful b!tch even cares. 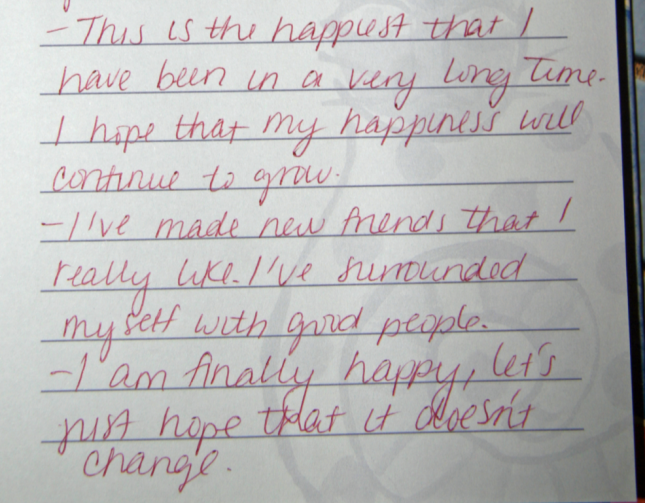 She probably justifies it by saying- well I wanted to give her up to adoption in the first place; Mom/Cindy is now bitching about the financial and babysitting duties; my new boyfriend doesn’t want a toddler around and neither do I; I wasn’t being the best mom- that would come out in court if Mom/Cindy tried to get custody; all my friends would find out that I’m a huge liar, loser and thief; I would have to actually get a job to support her; Caylee was torn between Mom/Cindy and me; she liked Mom/Cindy better; she’s getting old enough now to tattle on me and I would rather party at Fusion than spend time w/the snot rag anyway- good riddance.

I’m still going through the docs and pics (here’s a link) but I’m extremely disappointed to find that there were NO fingerprints found on the duct tape. Here are some highlights that stood out in what I’ve seen so far. Several things (as we suspected) link DIRECTLY back to the Anthony home. The laundry bag Caylee was found in– the exact kind and brand including being lined w/the exact kind of black garbage bag w/yellow handles was found in the Anthony’s garage. The duct tape brand, Henkel, matches that found in the Anthony home. When they came w/a search warrant evidently listing a Winnie the Pooh blanket– Cindy admitted that Caylee’s room was missing one. In what appears to be a flip flop as to who’s cooperating w/authorities–Cindy coughs this info up while George was very agitated and confrontational and Cindy made him wait on the porch. I’m certain they must have known that blanket was missing for some time. Yikes. The same brand and apparent lot number of clothing found at the scene were found in Caylee’s room.

Stuff comes out about Annie for the first time and I’m a bit disappointed. I was hoping that bc she and Casey were so close that Annie’s intv and such were being w/held bc they were so incriminating. Some may still be held back but evidently she and Casey had a falling out and were not as close -at least not BFF style- during the time in question. She does speak to the obvious rivalry and jealousy between Cindy and Casey about Caylee and says that Casey once felt she was having a break down (March 2007) and talked about getting help and possibly having herself committed– Cindy talked her out of it I guess bc Casey later said I talked to my mom and I’m ok. Damn. Annie said that EVERY time Casey went out at night Cindy would call and harass her bc she thought Casey should be spending time w/Caylee.

Jose has released a statement calling the forensic science in the case “junk science.” I call Jose’s work on this case “junk law.” Jose supposedly got these documents 9 days ago and has not gone to see Casey since then– nor has any other member of the defense team. This is the longest period of time that Casey has gone w/out a visit from the defense…her only visitors. That’s interesting. Poor thing, maybe I’ll write her a letter. I wonder if she even knows that new docs were released? Has she had any communication w/anyone? Will someone now try to convince her to take a plea?

Here’s a pic of the heart sticker that was found at the crime scene. They also found a sheet in Casey’s home w/missing heart stickers. 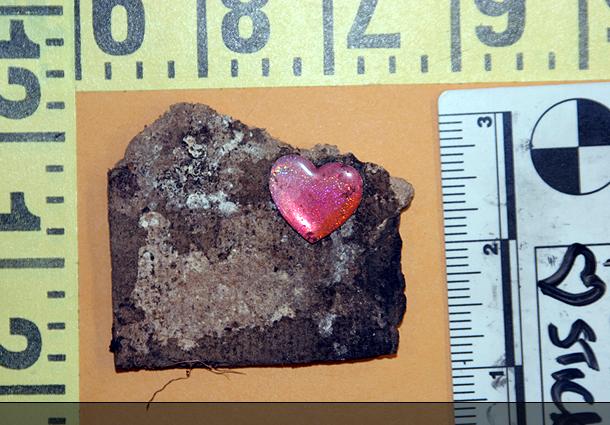 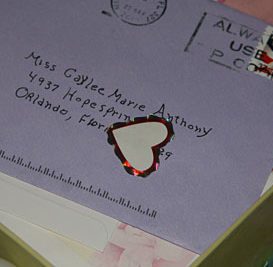 Found in the Anthony home- missing a heart sticker.

It’s hard not to think about the Anthony family right now. I hope everyone keeps them in their thoughts and prayers. I can’t even imagine what they must feel as more and more nails are driven into their daughter’s “coffin” — can they possibly still deny reality any longer? I haven’t heard anything more about their trying to negotiate a “private” meeting w/Casey but I am still convinced that they wanted to do that in order to try to get her to cop a plea. I really wish she would. What possible defense could any reasonable person believe? Not everyone is quite as dumb as you, Jose.

BTW- the Winnie the Pooh blanket- every time it is mentioned in these documents it is called- a “stained Winnie the Pooh blanket.” I wonder what that stain is? Is the stain just decomp or was the blanket stained in the act of murder and that’s why Casey had to take it from the house? Not that Casey is smart, but it sure seems like a colossaly stupid thing to do– to take that blanket which Cindy was sure to notice (and did). We don’t know WHEN Cindy noticed that but she only came clean that she knew it was missing as soon as she read something related to it on the search warrant police were executing. 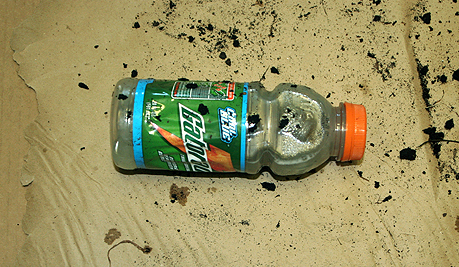 Found at the burial/dump site.

Another interesting bit found at the scene was a blue Gatorade bottle w/white sediment in it. Either in that bottle or near it was a syringe secreted in what appeared to be a cardboard center from a toilet paper roll. I hope that some of that tests positive for chloroform. (Annie said that when she asked Casey about the chloroform she said- well I had cleaning products back there.) I wonder why a syringe though? Where would she get a syringe? Were either of Casey’s grandparents diabetic or using a syringe for their health care? Annie also said that Casey tried to throw Jesse under the bus – saying well, Jesse had a key to my car. I wonder why she really went to his house to “take a shower” that day? Was she trying to frame him? Seduce him? Rev. Grund said that Jesse told him Casey left the door wide open while she took a shower that day. But Jesse wanted none of it – he wasn’t falling for it if that is what she was up to. Yikes, I wonder if she wanted a “sample” from him to plant on Caylee or at the scene? What day was that? I’ll have to look it up, I can’t remember. I would not be surprised if she was scheming some thing like that up. She is pure evil. WHY does this journal say ’03? Did the pen skip and it was supposed to say ’08? Wishful thinking. Was Casey just writing ’03 to protect herself? That seems bizarre. Why would LE release the diary if they didn’t feel it was related? It seems to me that the ’03 may totally nullify the diary. Bummer- it sure seems to fit and probably does. WTF? Here’s a wordle of what she wrote: 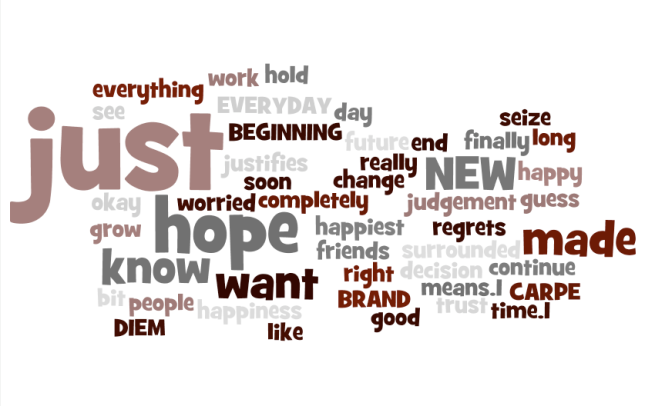 Oh, somewhere in the documents it clears Lee Anthony as being Caylee’s father- he was NOT. NOT that I ever suspected he was, but some did. It actually had me googling ‘brother sister incest’ – gross. Just another of the despicable things Casey has forced me to do in this case, like buying the Enquirer. Anyway, in doing so I found an interesting article where a sister writes affectionately about having a sexual relationship w/her brother over several years and many of the comments are supportive. To each his own. Thanks Casey.

Posted by CitizenKim on February 18, 2009 in Uncategorized

← Thirsty Koala – Give a Bear a Drink!
Lee Anthony’s depostion (in Zenaida’s case)- a summary. →

8 responses to “Casey Journaled about Having NO regrets and Hoping the End Justified the Means!”