RSS
← George and Cindy winning hearts, dissing Oprah.
Cindy and George will be on Larry King Live tonight…I have some questions! →

Casey flipped out – was restrained when she learned Death Penalty was back! 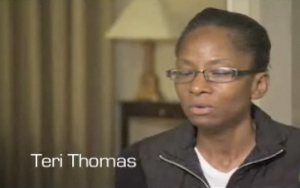 Radar Online has a 5 minute interview w/someone who was supposedly incarcerated for a period of time in a cell above Casey. The woman interviewed, Teri, says that Casey had to be restrained when she found out they were seeking the death penalty again. Teri was serving a 30-day sentence for a probation violation on a bad check conviction and said she was housed in the cell above Casey’s. Teri said that Casey was screaming, “I’m pissed!” and was so uncooperative w/corrections officers that she had to be restrained to a bed where she continued to cry out and scream for over an hour. It’s an interesting interview- the woman seems believable…but who knows? At one point it sounds like she says, “this says…” – is she sharing the story for someone else? Her name in the intv is Teri Thomas but it says she was incarcerated under her married name Teri Narsesian.

Teri says that Casey looked directly at her and pleaded “Help Me!” – at one point, which is the most unbelievable part of the story for me. WHY would Casey say that? It seems it would be a futile request- how did she expect someone in a cell to help her? The woman describes Casey’s cell a bit and says that it appears she’s a frequent shopper in the commissary for snacks. She also describes something like a “shrine” to Caylee w/pictures and flowers- not nectar flowers but “paper machete” — Chilling indeed! She just misspoke there about the flowers, as she also seemed to do a couple of times- misusing “per se” – but overall she seems well spoken, and quite reasonable and rational. Very interesting! I kind of wish more fellow convicts would speak out. Questions? Comments? Thoughts? Concerns?

Posted by CitizenKim on May 11, 2009 in Uncategorized

← George and Cindy winning hearts, dissing Oprah.
Cindy and George will be on Larry King Live tonight…I have some questions! →

5 responses to “Casey flipped out – was restrained when she learned Death Penalty was back!”